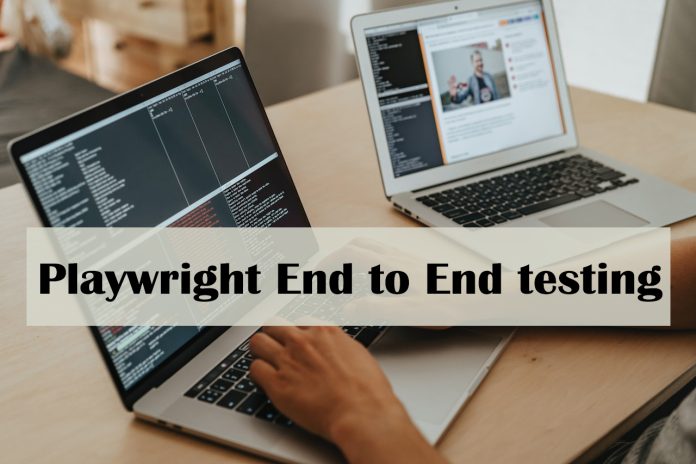 How to Perform Playwright End to End testing

Currently, test automation is the most effective way to quickly deliver high-quality web applications to your end users. Thousands of web application development companies have started to spend the time and money to shift from manual testing to automation testing. However, web application development companies need to take the time and effort to analyze the test automation frameworks, tools, and languages that would be perfectly suitable according to their needs. Implementing Playwright automated testing is one such way that can massively help you to improve your testing experience.

However, the developers have to perform a proper setup process to utilize the full potential of this testing framework. So in this article, we will take the new developers on a tour to understand the setup process for Playwright end-to-end testing.

We will also try to discuss some of the wonderful features that are offered by Playwright. Our analysis will also include how these features can help to solve most of the obstacles that you might come across while performing automation testing. Let us begin our discussion with the basics of Playwright.

Everything You Need to Know About Playwright

Playwright is a popular open-source Automation Testing Framework to perform end-to-end testing. It allows you to perform the testing processes in multiple programming languages. For instance, Playwright supports TypeScript, C#, JavaScript, and many more. The basic working mechanism of this Framework is that it opens a high-level API for interacting with the web browser in a secure and safe way. This Automation Testing Framework provides many interactive features that help it to grow in an exponential manner. Currently, Playwright has almost 14000 users on GitHub. Playwright disposes of the conventional practice of sending HTTP requests for testing purposes. Instead, it uses the DevTools protocol available in Chrome and Firefox to directly work in the WebSocket. This process helps to ensure shockingly fast interactions with the browser.

The open-source nature of Playwright also helps individual developers and small companies to implement it on the test bench for free. Playwright also provides a lot of elaborate documentation for the new developers. This helps to significantly reduce the learning curve and the initial setup process. For ease of understanding, we will continue our discussion by using TypeScript as a default language for all the test creation processes using Playwright. So let us shed more light on TypeScript so that none of the readers might feel left out.

The Basics of TypeScript

In brief terms, we can define TypeScript to be a superset of JavaScript programming language. To simplify this statement, we can say that while using typescript the developers can still utilize their existing knowledge of JavaScript. Additionally, they can add certain features that were not previously available while using JavaScript. This programming language is more object-oriented compared to JavaScript. So, developers who are accustomed to programming languages like C# might find it easier to use. In the backend process, TypeScript will convert all the test codes into plain JavaScript as it cannot be understood by the browser. It also helps to address certain limitations of JavaScript like pre-compilation errors, Static typing, and interpretations. TypeScript performs all these processes while ensuring that you can run your code on every browser host.

The Choice of TypeScript

Now, many developers might get confused over our choice of TypeScript as many other alternatives are compatible with Playwright. So, to justify this, we can say that while using object-oriented programming the developers will find it tricky to switch to JavaScript. On the other hand, typescript although very similar to JavaScript is more object-oriented. This process also makes it easier for the quality assessment teams to perform the testing processes while ensuring the quality of the application. Now, let us take a quick look at some of the major differences the developers will notice between TypeScript and JavaScript:

The Setup process of Playwright with TypeScript

Setting up Playwright using the VS Code Extension available with it: The developers can perform this installation process from the extension panels. Then, they can simply select the “Playwright install” option available in the command palette.

As we already discussed earlier, the TypeScript codes are compiled into simple JavaScript code in the backend processes. In some cases, the system fails to automatically conduct this process. However, there is a way in which the developers can manually perform this process. The first step is to add a tsconfig.json file to the project that the developer is currently working on. Then, the developer has to create a script inside the project and add a specific set of commands. The system will execute the pretest command before the test command. This process will help the developers to compile and generate the test commands into the “tests-out” directory. Once the tests are executed, the pretest will command the framework to select the tests from the tests-out directory.

Writing and Running the Playwright tests

Now that you’ve finished completing the configuration process, it is time to understand how to write tests with Playwright. The first step in this process is to create a new test file inside the project. After the developer has created a blank test file, it is time to import all the playwright modules into this file. The next step in this process is to add the real testing process for the system. For instance, you can command the test to navigate to any website according to your needs. The developers must remember that they can find all the required selectors in the DevTools option of the specific Browser.

Running the Playwright Tests Using the VS Extension: After installing the vs extension, the developers will be able to see all the tests in the Explorer Menu available on the left side. Clicking on any of these tests will allow the developers to run it or debug it.

Using the terminal to Run the Playwright Tests: The developers can run the command “npx playwright test typescript.spec.ts” in the terminal window. In case, the developer has only one test file, there is no need to specify the file.

Some of the best Playwright testing Practices

While using playwright end-to-end testing, the developers can implement various ways to ensure that they are getting the most out of this Automation Testing framework. Let us take a quick look at some of the best practices:

1. The proper use of the API Feature

The main function of API is to improve the test while avoiding the UI testing steps. This process helps to drastically improve the execution time for the application. One of the major advantages is that it can be implemented without making major changes to the primary code.

Using this feature, the developers can automatically set the execution process to find test failures and trace them.

Playwright provides an extensive debugger that helps to improve the complexity of debugging while using TypeScript or JavaScript.

Various tools and platforms play a vital role in improving the efficiency of Playwright end to end testing processes. However, a quick survey of the market will reveal that there are thousands of such options that are currently available.

LambdaTest is a cloud-based platform that a developer and testers use to perform automation testing at scale across 3000+ real browsers, devices, and OS combinations. It ensures that the application is functional across every latest and legacy browser. Using LambdaTest, you can perform Playwright end-to-end testing across 50+ browser versions on the cloud-based grid. You can implement parallel testing and cut short your test execution cycles by multiple folds.

Using parallel testing, the developers can initiate multiple test instances at the same time. So, this process plays a critical role in reducing the overall testing period for the web application. Since the test cases are executed on a cloud platform, the developers do not have to bear the hassle of setting up a physical device testing lab.

So, we can easily conclude that Playwright is one of the most fun-to-use and robust automation frameworks available in the present market. It is very helpful and simple for developers were willing to try something new. The built-in features of Playwright can help the developers in multiple test case scenarios. Some of the tests that you can perform while using Playwright are components integration, UI, API, etc.

Pairing this framework with some of the most efficient test automation platforms like LambdaTest can help developers to elevate their development standards. The developers also have the liberty to run the Playwright test cases on the local system or any cloud platform. In this modern and competitive application Development Industry, the developers must remember that they cannot leave any room for error if they want to maintain their stand in the market.