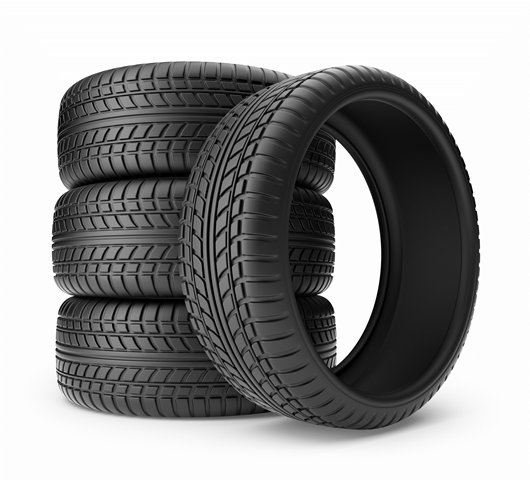 On the surface, car and truck tires don’t seem like terribly complex things; basically donuts made of rubber, steel belts and compressed air -that’s about it, right?  Well, decades ago that may have been the case but in recent years tires have starting to get a bit more complex.  In this article, we’ll take a look at some of the newest features popping up in the world of automotive tires.

As you may know, the earliest vehicles had wheels with solid rubber surfaces. The rims themselves were made of either wood or steel and they were covered with a thick layer of solid rubber. While this sort of tire can be very durable, they don’t absorb road shocks well and this makes for a vehicle which rides pretty harshly.  That was all changed, however, in the late 1880s by John Dunlop who introduced a rubber tire that was inflated with compressed air. The ride of a vehicle with “pneumatic” tires was so superior to the old solid rubber style that most manufacturers switched quickly.  With the exception of the construction of internal cords or “plys” that were added to strengthen tires, tire construction was the essentially the same for the next hundred years.

How tires are made today

It all starts with the basic ingredients: rubber, carbon black, steel belts and various chemicals like short rubber monomers and other compounds. Today most tire manufacturers utilize special steel molds that the rubber compounds and steel belts are inserted into and then cured under high heat and pressure. This curing process creates a polymerization reaction that links all the short rubber monomers into long elastic rubber molecules. When the curing process has finished, the molds are opened and completed tires pop out.

Like any technology, tire features and designs continue to evolve. Here are a few interesting advancements that may make their way to the marketplace.

EverGrip – The French manufacturer Michelin has invented a tire that will literally evolve as it wears out. Here’s the concept: present tires perform great when new, but as they age they lose their grip because their grooves become smaller. “EverGrip,” as it’s referred to by Michelin, uses main tread grooves that get wider as they wear down. It’s a fascinating idea: tires that become safer as they age.

DiscolorTyre – The problem: most car owners can’t effectively tell when their tires are worn out without measuring the depth of the tread grooves. To address this problem, Bridgestone has created the “DiscolorTyre.”  These tires start life as any other black rubber tire, but as tread wear reaches minimum legal level, a layer of bright orange rubber appears.  The tire surface literally changes color as it wears down. With 13-percent of all cars on U.S. roads estimated to have one or more bald tires, this is a creative solution that is such a good idea that it might make its way into law soon.

Self-inflating Tires – Self-inflating tires for the consumer market are also being explored by several manufacturers. Already a technology used for some heavy machinery and military vehicles, self-inflating tires use sensors that measure pressure in the tire. If the pressure is too low, a connected air source inflates the tire during operation. Not only is this a great idea for gas mileage (properly inflated tires roll with less resistance), it will ensure that the tire surfaces wear more evenly thus saving the consumer money.

Airless tires – First explored back in 2005, Michelin’s “Tweel” is an airless tire that bears little resemblance to the rubber tires of today. The Tweel is made of a solid hub, flexible polyurethane spokes and an outer band of rubber tread. The way they work is that the spiral inner spokes absorb the force from the road while driving.  No compressed air is involved at all. One of the key features of the Tweel is that new rubber driving surface can be applied when the old surface wears out. This is a major issue for environmentalists.