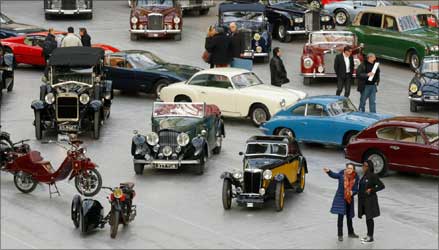 Here’s a bunch of very strange things that almost made it into production on American cars and some that actually did.

Is a steering wheel the best technology automakers can use to steer a car? Well, Ford tried another method in the 1960s. In 1965, Ford attempted to make the driving experience better and safer by introducing the unusal  “Wrist-Twist” steering system.  Destined exclusively for Ford’s Mercury Park Lane models, it featuring two small rotating wheels fastened to a central steering stalk.  Google it and you’ll see an image.  The concept behind the “Wrist-Twist” was that the driver would get a better view of the road and thus it was promoted as a safety feature. Due to poor feedback, the design never made it into production.

In 1956, all Chrysler Corporation vehicles offered an option called “Highway Hi-Fi. Built by Columbia Special Products, Highway Hi-Fi was a special built-in record player that hung beneath the dash.  The technology used special 45rpm anti-skip records. Occasionally you can find these units for sale on eBay where antique car enthusiasts quickly snap them up.

The Cadillac Brougham in 1957 came with a genuine mini-bar in the glovebox. This actually happened but it doesn’t sound possible, does it? What state would allow such a thing? You have to remember that this was over 60 years ago and in most States there weren’t any Driving While Intoxicated (DWI) laws.

In early, 1980s, Toyota became the first manufacturer to make seatbelts “automatic”. The seat belts were physically attached to the door, meaning that you needed to slide under the belt when entering the car. It seemed like a good idea at the time but feedback from customers wasn’t strong.  After all, there was no law on the books that said you had to wear seatbelts.

Ready for this?  Back in the early days of motoring, cars competed with horses as a general means of transportation. In 1899, Uriah Smith developed the perfect solution – a fake horse head.  The idea was that cars would be required to have his “Horsey Horseless” fake horse head attached to the front of the vehicle and this would calm skittish horses.  Unfortunately, the idea never caught on.

In the early 1970s, Ford and a few other manufacturers thought that it would be a good idea to replace the horn-button in the middle of the steering wheel with a squeezable rim that would trigger the horn. While this sounded (sorry, bad pun) like a good idea, it did have one major defect: as the rim shrank over time, the horn activation would occur at random times.

Yes, this actually happened, Goodyear created illuminated tires. This was back in 1961 and they were made of a special translucent rubber and had electric lightbulbs mounted inside the rim. They were pretty slick looking and actually illuminated the road at night.  Goodyear decided not to produce them so they never made it into production automobiles.