by Sheikh Zeeshan / February 23, 2018
An tech enthusiast, loves to write about newest technology based articles, reviews of useful gadgets, smartphones and other tech oriented products.

Save Online Videos to your Computer

Would you like to be able to ‘save’ any video on a website that you find worthwhile, so that you can watch it without having to be online? As you probably know most websites don’t give you that option, and while there are third-party apps that will let you do it sometimes – they tend to have lots of limitations.

The only way to definitely be able to save any video that you like from any website is to use Movavi Screen Recorder. It will let you rip video from website by essentially recording it from your screen, and as such it has no limitations whatsoever.

At first you may think that recording website videos from your screen sounds fairly complicated, but that really isn’t the case with Movavi Screen Recorder. If you already have a video that you’d like to save open on a website, you could launch and set it up to do just that in minutes.

Once you launch Movavi Screen Recorder, use your mouse cursor to draw a frame over the area where the video is located. After that adjust its size so that it encompasses the video as closely as possible, or select one of the presets in the list under ‘Capture Area’ if you prefer. 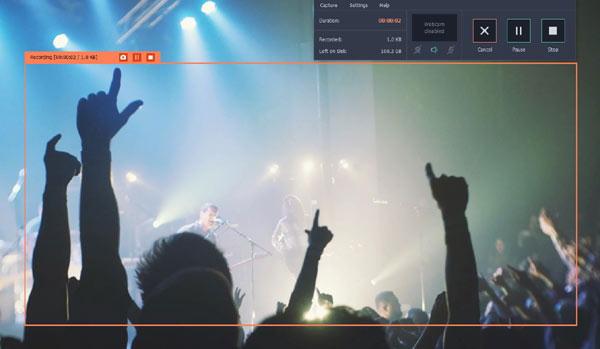 To start recording press the ‘REC’ button on the interface, and play the video once you do. After the video is over press ‘Stop’, and Movavi Screen Recorder will automatically save the video as an MKV file and open up a preview window where you can go over it or save it in a different format.

It is worth noting that in Movavi Screen Recorder’s preview window you could also trim out any unwanted parts from the video that you recorded. All you need to do is drag the white marker and click the ‘scissors’ icon to split the video at that point, then select the part you want to remove and click on the ‘trash can’ icon. Once you’ve trimmed out all the parts you don’t want, click ‘Save As’ to save the video.

As you can see Movavi Screen Recorder is really easy to set up, and if you like you can adjust a lot of the other recording parameters such as the frame rate, audio source, and sound levels. Additionally you could set it up to record keyboard or mouse actions, or automate the recording using the built-in timer or scheduler.

Seeing as Movavi Screen Recorder makes it so easy to rip and save videos from websites, it is worth giving it a try. Once you use it to save a video once, you should be able to set it up even more quickly the next time.

Should We Have This Meeting?