CES 2014 on its first day witnessed a great deal of innovations by technologists from worldwide. Among these were Ozobot and its tiny intelligent toy robot. The toy is based on a hybrid concept owing features of both physical and digital gaming. It comprises of complex but squeezed robotic technology with a sense to sniff the patterns and play accordingly. You can say, it is an intelligent robot, because it can perform quick movements just by observing what it understands.

It is the outcome of an extensive 18 months workout that the company has found its way to the ongoing Consumer Electronics Show, the world’s largest technology fair. The makers are claiming the tiny artifact to be the world’s smallest intelligent robot of its kind. In order to show the play, the mechanical players mount on your mobile device or a track with readable patterns. 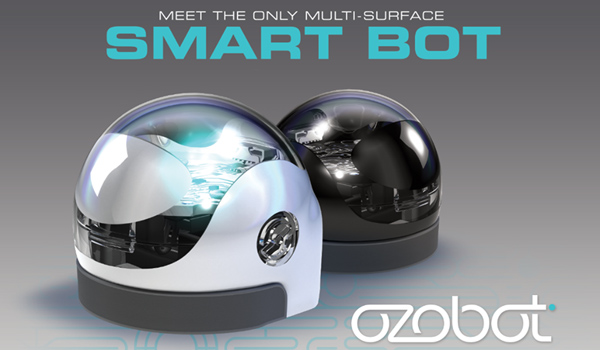 The Ozobot is very small just in size between those of a bottle top and a table tennis ball. The measured size is just over one inch in height and diameter. These robotic dwarfs are round headed and will be available with different customizable skins.

The tiny guys are embedded with minute sensors on the grim. The enclosed photo sensor array can distinguish between colors, patterns, and light. It can also perceive over 1000 secret codes and responds by pivoting, oscillating, and swiveling. These responsive actions are carried through optical communication and dual micro motors.

Just with the launch of robots in CES, Ozobot has also introduced certain free applications designated to play with these physical pieces. These games include OzoPath, which lets the Ozobot follow the paths and tracks on your tablet screen; OzoLuck, enables the Ozobot cross through the maize and uncover the outcomes randomly; and OzoRace, featuring a physical track that developed surrounding a tab. In addition to that, Ozobot is working on several other applications including OzoGroove that will be appearing on the app stores very soon. Apart from that, this interesting gadget would definitely appeal third party programmers to design and develop relevant apps.

Ozobot is prepared in compliance to both Apple’s iOS and Google’s Android, and the game apps would also appear at both of their application stores. Furthermore, this tiny soldier runs on a petite battery, which can stay functional for over 40 continuous minutes, while the battery charging time is also defined as 40 minutes. Ozobot can dance on other than the tablet screen, on specially fabricated tracks. OzoRace can be played on a similar kit with a race track on it. As more game apps develop, they might also bring similar kind of kits with something meaningful.

While the Ozobot Tiny Intelligent Robot is being appreciated on its booth throughout the CES, it is expected that the team of founders will be able to raise funds up to $100,000 through Kickstarter, so that they could carry production on a mass level. However, you can place an advance order for $60 approx.

As stated by the CEO, it would be a perfect connection that will combine old with new, nostalgic with inventive. The invention may give a newer dimension and popularity to the physical gaming powered by digital technology.